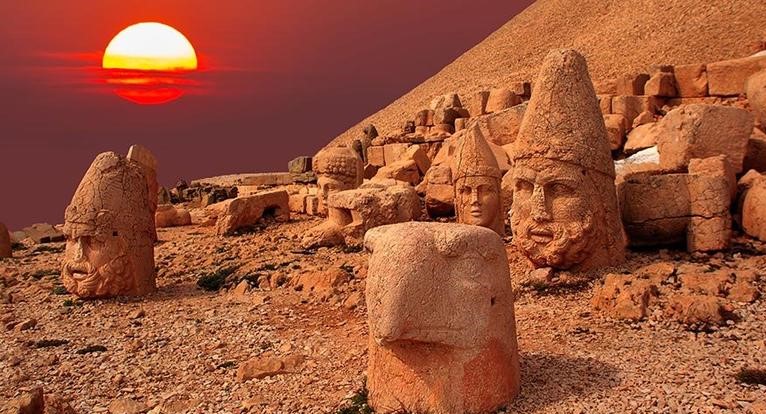 Turkey's location between Europe and Asia has produced an incredible history as waves of people, states, eras and empires have left their mark on the mountains, the people and the culture. Read on for Turkey's most impressive historical sites.

Göbekli Tepe:
Until the discovery of Göbeklitepe in 1963, Stonehenge (3,000 BCE) was believed to be the oldest man-made prayer site on earth. But at 12,000 years old, Göbeklitepe dates back about 6,500 years. Göbeklitepe's Neolithic megaliths are still excavated (so far only 5% of the site has been excavated).

Ephesus:
Ephesus was the Roman capital of Asia Minor and home to more than a quarter of a million people - from slave traders to saints - at its peak between 1 AD and 2 AD. The location of the Temple of Artemis, which was one of the Seven Wonders of the World, 150 years of excavations at Ephesus has revealed the most complete Greco-Roman classical city on earth. No wonder it has just been added to the list of UNESCO World Heritage Sites.

Hattusha:
Hattusha is one of the largest ruins in Turkey and was once the capital of the Hittite Empire. A UNESCO World Heritage Site, it was founded around 1600 BC, then conquered and largely destroyed after 1200 BC. The ruins have been well preserved ever since. From ornate gates, such as the Lion's Gate, to temples, royal houses and ancient fortifications complete with underground passageways, it's hard to get bored wandering around what was once the region's most powerful city. Hattusha is the site of the world's first peace treaty, the Treaty of Kadesh.

Perge:
Founded around 1000 BC, the ancient city of Perge was conquered by the Persians and then around 333 BC by the armies of Alexander the Great before becoming part of the Seleucid kingdom. Then the Romans came in 188 BC. They built most of the sites you can see today, including a theater big enough for 15,000, a public square, gym and necropolis. Recent excavations at Perge have revealed 13 ancient sculptures, including the only complete sculpture by Emperor Caracalla to date, a 1.8-meter rendition of moon goddess Selene and goddesses Nemesis, Aphrodite, Athena and Tykhe.

Zeugma Mosaic Museum:
The Zeugma Mosaic Museum is part of the Archaeological Museum of Gaziantep and contains an extensive collection of restored mosaics from the ancient Roman city of Zeugma, about 27 miles from the city of Gaziantep. Today, 25% of Zeugma is under water due to the construction of modern dams. During your visit to the museum, look out for the terrifying eyes of the "Gypsy Girl".

Olympos and Phaselis:
Phaselis - located near Tahtalı Dağı, known in ancient times as Mt. Olympos - was once used as a base by a powerful group of pirates. The city was completely abandoned by the 15th century AD, but much of the original Lycian site is still intact. Visitors should also watch the dancing natural gas flames that burn constantly on the nearby mountainside of Çakaltepe.

Alanya Castle:
Alanya castle is a Seljuk ruin on top of a high peninsula overlooking the sea. There are nearly 6.5 kilometers of defense walls, reinforced by 140 ramparts and 400 cisterns; it was once one of the best-defended cities on the Mediterranean. When you visit the castle you will see the palace of Alaaddin Keykubat, a number of mosques and a church.

Blue Mosque:
The Blue Mosque (Sultanahmet Camii) was the ambitious creation of 19-year-old Sultan Ahmed I - he started the project in 1609 and today it is one of Istanbul's most iconic locations. Ahmed I wanted to build a mosque to match Hagia Sophia. When it was finally completed in 1616, the Blue Mosque, with its ever-growing domes, large minarets, and blue tiles adorning the walls, did indeed achieve this. Ahmed I died just a year after his Blue Mosque opened.

Topkapı Palace:
For nearly 500 years, Istanbul was the seat of the mighty Ottoman Empire, and for much of that time the Ottoman sultans lived in Topkapı Palace. Much more than just a single structure, the Topkapı complex was made up of a hospital, a currency and multiple mosques and was home to thousands of people. When the empire ended in the early 1920s, the palace was turned into a museum dedicated to the Ottoman era. It also contains important religious relics.