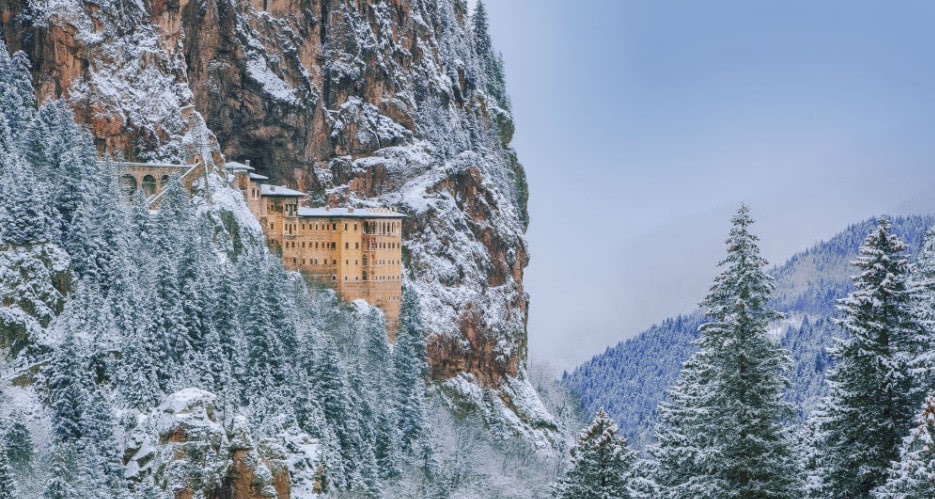 Nemrut:
Nemrut, also known as Nemrud, stands at over 7,000 feet and is the site of the 1st-century BC mountain peak of King Antiochus I Epiphanes. It is known for its 10 meter high statues with various mythological figures, all of whom have seen their heads fall from their bodies. This UNESCO-protected site is best visited at dawn or dusk.

Bodrum Castle:
Bodrum Castle, also known as St. Peter's Castle, was built in 1402 by the Order of the Knights of Saint John, who sought safety from the invading Seljuks. The urgency of the work is evidenced by the fact that the walls of the castle have been reinforced with materials stolen from the nearby Mausoleum in Halicarnassus. The castle is open to the public and contains the unmissable museum of underwater archeology.

Goreme Open Air Museum:
Cappadocia's open-air museum, Göreme, has about 30 old churches and is about as far away from a traditional museum as possible. In the haunted landscape of stone pillars, the rough-hewn rock-hewn churches - particularly those of the Dark Church and the Church of the Buckle - contain some of the best-preserved frescoes in Cappadocia. By the late 2nd century AD, the Göreme Valley had been transformed into a center of Christian activity, with converts fleeing persecution drawn to the area's natural defenses, including entire settlements underground. Another underground city has recently been discovered in Cappadocia, and archaeologists believe it could be the largest underground city ever.

Myra:
According to the Greek geographer Strabo, Myra was one of the most important cities of the Lycian League in the 1st and 2nd centuries BC. Today, Myra has a collection of mostly Roman ruins, including the acropolis, an amphitheater and Roman baths. Among the more notable structures are two tombs carved into rock walls (the best known being Lion's Tomb, with 11 life-size figures embossed on the wall).

Aspendos:
The Hittites first wrote about the Roman theater Aspendos in 800 BC. The amphitheater accommodated 15,000 people and was once part of the town of Aspendos, founded by the ancient Greeks from Argos. In modern times, it hosts the annual Aspendos International Opera and Ballet Festival.

Hagia Sophia:
The world famous Hagia Sophia is a 6th century church turned mosque and today it is a museum. Originally built in the 4th century AD by Constantine the Great, there are few remnants of the original structure, or the one built after that in the 5th century. What visitors see today dates from between 532 and 537 AD, raised in the Byzantine style by order of Emperor Justinian. Hagia Sophia served as a religious center for the Eastern Orthodox Church, but the building was converted into a mosque under Sultan Mehmed II in 1453 when Constantinople was conquered by the Ottoman Turks.

Simena:
Simena one of the most impressive historical places in Turkey. Simena sits beneath the remains of a Crusader castle, and many of the ruins, some of which date back to the 4th century BC, have been partially submerged in the Mediterranean since a series of earthquakes 1,800 years ago. It is also home to a Lycian cemetery, and huge sarcophagi are scattered along the nearby hill.

Sumela Monastery:
Take the steep path and stairs through the forest in the Altındere National Park and you will eventually arrive at the Sumela Monastery, a Byzantine monastery dedicated to the Virgin Mary. It lies on top of the extreme edge of a steep rock wall of about 300 meters high .. The monastery ceased operations in 1923 and was subsequently transformed into a museum.

Aphrodisias:
During the Hellenistic and Roman periods, the small town of Aphrodisias, named after the goddess Aphrodite and located in southwestern Turkey, was an important source of marble. The stone was extracted from nearby hills and shipped around the ancient world for use in facades and sculptures. A number of master sculptors have therefore established their home in Aphrodisias and much of their work has been excavated and is on display in the on-site museum.